I thought, this year, that it would be a good idea to start the year with a week’s training to make me more confident in handling Drumler.  So I booked for a trainer to come aboard for 5 days from the East Anglian Sea School down at Levington.  The point being to train aboard Drumler, with her running backstays and highfield levers and old fashioned foresails, rather than some whizzy Jeanneau 36i Performance yacht with furling foresail and colour coded halyard running to the cockpit etc.

My sister kindly agreed to come up and look after the little ‘uns, which then freed up Sarah (my wife) to come aboard too and train as Competent Crew – as I said to her: I at least want her competent enough to be able to turn around and pick me up if I fall overboard; or to be able to get safely back to a mooring by herself if something happened to me on a trip.

So we both spent 5 days in the very pleasant company of Julian, who was amazingly calm and laid back in his approach – which was exactly what I needed – and very thorough in covering a great deal of the syllabus for the Day Skipper practical training, without giving the impression that he was in fact covering any particular syllabus.

Unfortunately, there was a force 5 easterly for most of the week, so we didn’t manage to get out to sea, as apparently leaving the Deben can be a bit hairy with an Easterly. So we spent the whole week sailing up and down the Deben to Bawdsey and back.

I was surprised how quickly Julian reefed the mainsail, and reduced the size of the foresail.  We hardly had the Genoa up all week, and reduced to the headsail to the No 2 Jib frequently.    His approach tended to be to keep Drumler as upright as possible and, whenever she started heeling significantly, he would reef down the mainsail and/or change down the foresail.  Obviously this was partly to keep things under control for novices, but it’s true that we moved along perfectly well with less sail, and it all felt far more under control.  So, a good lesson learned for me for the future.

Here we are with a steady force 6, gusting 7:  2 reefs in the mainsail and no foresail, scudding along calmly at 6 knots.

By the end of the week, I felt a lot more confident handling Drumler.  The wind increased steadily throughout the week, giving plenty of scope to practice changing sails and reefing; and also getting to grips with the running backstays and things like using the preventer (to stop accidental gybes) and the autosteer, and coming back to the mooring under sail only, etc. 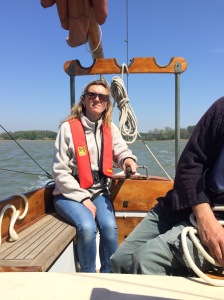 Sarah at the helm

The good news was that Sarah also loved it, and has signed up to finish off her competent crew course later in the summer.

I also agreed with Julian that we will go out one weekend later in the Summer to complete a sea trip and a night sail so I can complete my Day Skipper – in the meantime, I mean to get out on the river as much as possible to build up my experience aboard.