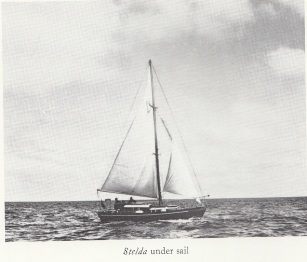 Stelda was built by the Cheoy Lee boatyard in Hong Kong in 1963 – the same year and boatyard as Drumler – and was made of Teak with Ipol frames (a type of Indonesian hardwood), with a Bermudian rig.  She achieved fame when Peter Woolass sailed her single-handed from England to Madeira, then on to Tenerife and the West Indies in 1969; a total journey of 4,950 miles.  Peter described his journey in the book “Stelda, George and I” which he published in 1971.

“George” – the self-steering gear that Peter Woolass made for his bumpkin (instructions in his Blue Book).