After my worthy efforts two years ago, scraping and repainting Drumler’s hull, I finally conceded that some things are best left to the professionals, and so contacted Robertson’s Boatyard to discuss an extensive winter refit.

Drumler’s cabin was in a fairly sorry state, with paint peeling off, and many of the locker doors were slightly warped and would not close.  Her brightwork was in sore need of rubbing down and several coats of varnish.  Last year, because of the constant rain, Geoff at Everson’s Boatyard had struggled to put down more than two coats, which had quickly deteriorated from the sunshine and general weathering over the summer.  Realistically, although I enjoyed the work I did on her, I just don’t have the time  needed to put things right.

The great thing about Robertson’s is that they have plenty of experience with wooden boats – back in the day, they used to make Vertues themselves, for example V110 Fialar, built in 1962 and V131 Sekyd, built in 1965; thought the boatyard has changed hands several times since then.   Even so, they still specialise in refitting and restoring wooden boats, and they have a large hangar where Drumler could be safely varnished regardless of the weather.

So, in she went for four months.  As per usual, the list of things needing repair expanded to fit the available time: a new cooker as the old one had no safety gas cut off, and so the gas service engineer wouldn’t go near it.  A new VHF ariel, a replacement sacrificial anode (already), repairs to stanchions, etc.  Alan Fuller, the MD at Robertson’s, patiently accepted the ever-growing list of tasks with good humour.

My plan this year was to lift her back in early, and then to spend 5 days on board, early in the season with a trainer from the East Anglian Sea School, to give me a bit more confidence handling her, in preparation for taking the family out for more day sails this summer.   So the deadline we set was fixed by my training week from 9 – 14 May, so we penciled in a lifting in date of 26 April. 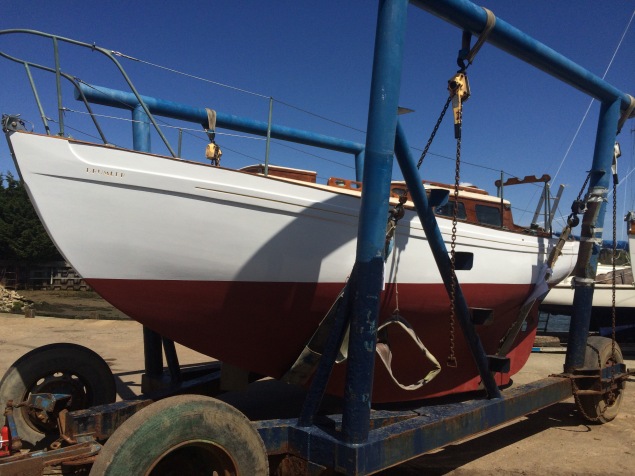 Drumler freshly painted, waiting to be lifted in

Inevitably, the steadily-growing list of last-minute jobs meant we missed that but, amazingly, only a week later, on 4th May Alan managed to get her back into the water.  After a day sitting on the mud to make sure her seams were watertight (they were), she was back on her summer mooring on 6th May – about a month earlier than previous years.