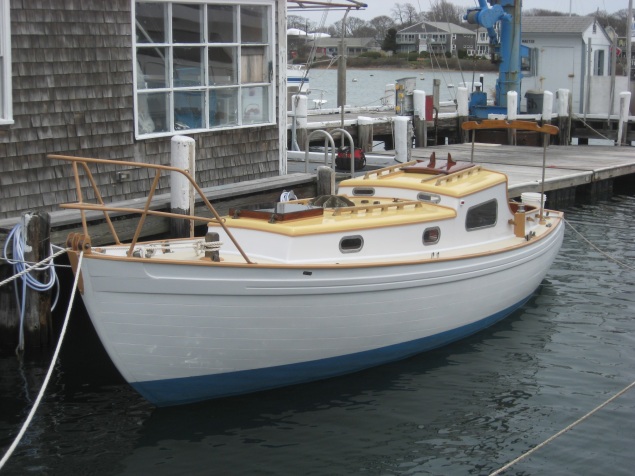 Built in 1952 by Elkins of Christchurch.   As of April 2016, Bill Rogers reported that Davalan has now been relaunched in Falmouth Massachusetts after a 4.5 year refit at Woods Hole. He sent me the image above, which shows the refit was well worthwhile.

Its very exciting to have the boat almost ready to sail.  I have admired these boats since I was in my 20’s and I even had a survey done, in the 70’s, on another Giles yacht named Prince du Neufchatel.  I wonder what became of that boat.

I am going to change the name.  I have heard that “Davalon” was a combination of the first owners children’s names and, after the amount of work that I have put into her, I think the gods that keep track of these things will allow it.

I’m thinking of naming her “Stronghold.”  In some esoteric biblical sense  stronghold is a synonym for virtue.

Anyway, the boat is taking up well after being on the hard for about 15 years and I expect to have her rigged in about a week.